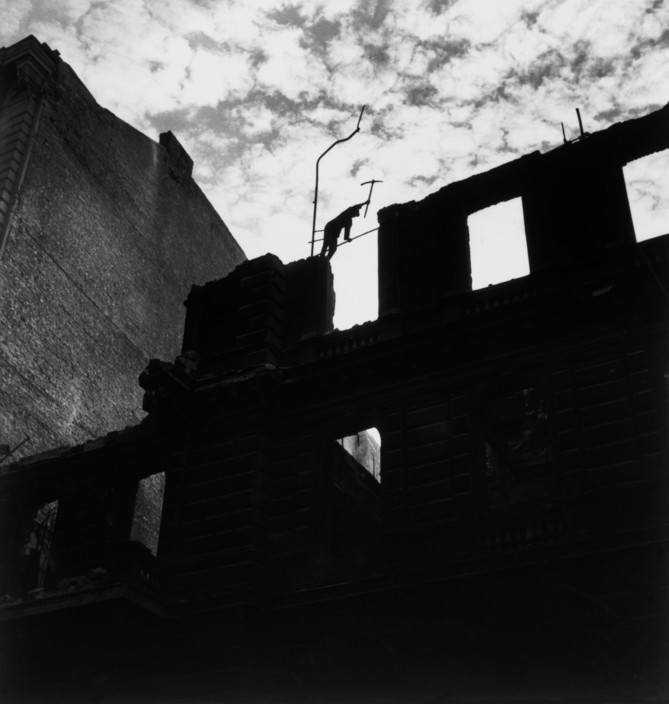 “The city was like a beautiful woman whose teeth were knocked out,” Robert Capa wrote of Budapest in 1948, when he photographed the still ruined Hungarian capital for six weeks. But where exactly was Capa? When did he record the reopening of the railway bridge? Where did he photograph Mátyás Rákosi? Which ruined hotel did he go to the top of? Find out more about the legendary photojournalist’s pictures taken in Budapest!

The Budapest Autumn Fair was held in the City Park between September 3 and 13, 1948. “There is a huge interest in the fair because it presents the achievements of the planned economy, which helped to create an abundance of merchandise from fall and winter necessities,” wrote the journal called Szabadság [Liberty] on September 4. A fashion show was held on the same day as part of the Autumn Fair. Capa probably took the photos during this event. “The fashion show was the entertainment of vacuous, ‘noble’ queens so far. […] This fashion show featured not the exorbitant fashion dreams of Patou and Dior on the catwalk, but the cheap and stylish clothing options of the working woman,” one could read in the newspaper called Világosság [Lucidity] on September 5, 1948.

Capa also wrote an article about his staying in Budapest, which was published in the Holiday magazine in November, 1949. The text accompanying this photo was: “The Connective Railway Bridge over the Danube has opened in Budapest and the workers who assisted in the reconstruction are escorting the first train through it. The inscription on the bridge reads: ‘Long live the Soviet Union, the strongest guardian of peace!’”.

The new South Connective Railway Bridge was inaugurated on September 12, 1948. Its predecessor was destroyed in the Second World War and then used as a semi-permanent bridge from 1946.

“On Sunday morning a huge crowd came together at the Buda side of the South Connective Railway Bridge. Already in the morning endless stream of workers of the city were marching to the bridge to witness the celebration, where Ernő Gerő, Minister of Transport inaugurated the latest creation of the workers, which was ready 84 days before the set deadline. The participants applauded and cheered for long minutes after the speech of the Minister. After this Árpád Szakasits, president, and the members of the government and the guests got on the special train, which became the first to roll along on the bridge. After the opening ceremony, the regular railway and pedestrian traffic started off,” reported the Népszava on September 14, 1948. The inauguration was held at Buda, on Capa’s photo one can see the marching workers on the bridge, and in the background the chimneys of Ferencváros [IX. District of Budapest].

“At 11 a.m. on Sunday morning, a military parade of unprecedented proportions since the liberation will begin in Budapest at Heroes’ Square. All the troops of the Hungarian Armed Forces, including the countryside, are represented at this parade, in which they worship the memory of the glorious army of 1848 and confess to the new Hungarian People’s Army, the democratic idea,” Népszava wrote on September 18, 1948. After the ceremony on September 19 in Heroes’ Square, “the President of the Republic and his entourage got in the car with the invited guests and went to the Körönd, where they watched a dazzling parade of patriotic, police and freedom fighter troops from there.” This parade was photographed by Capa: in the background, one can see the mouth of Szinyei Merse Street, and on the tribune, in the middle, in a gray suit, stands Mátyás Rákosi. The inscription covered by the soldiers: “In the spirit of 1848 forward! / To the working people and army [?] ”.

In the summer of 1948, the maximum daily temperature approached forty degrees several times. “The hot days populated the beaches”, “hundreds of thousands stormed to the beaches in the heat”, “tropical heat in Budapest, people flooded the beaches,” the newspapers wrote in July and August 1948. “Around two thousand people splashed in the cool waters of the Gellért Baths on Sunday. Our cheaper ticket came into effect on the day the heatwave hit us. So far, the bath has been uneconomical, but thanks to the heat, we brought in this payment in one day! If only the heat would remain for a long time!,” said the bath attendant of the Gellért Baths at the end of July. On Capa’s photo, there is no such squash, this picture probably was also taken in September, in the still-hot autumn weather.

“On the jagged top of the old Ritz Hotel tiny figures with picks were attacking the burned-out brick walls. The silhouettes of the working men against the sky made me want to open my camera,” wrote Capa in the article, which was published in the Holiday magazine. The photographer was wrong about the hotel: the picture shows the demolition of the Hotel Hungária. The worker is on the third floor of the building, on the left side one can see the firewall of Hotel Bristol, so the picture could have been taken from Apáczai Csere János (at the time Főhercegnő Mária Valéria [Archduchess Marie Valerie]) Street. “The clearance of the Danube Embankment has started in recent weeks, the Carlton and Hungária Hotel will be demolished to the ground floor by December at the latest,” Szabadság wrote on September 8, 1948. Hotel Ritz was located at Eötvös Square, it was also bombed in 1945, but its ruins were already cleared in 1947.

Hotel Bristol is also being demolished. In the background is the then Greek Orthodox Church, the southern tower of it was collapsed during the siege of Budapest. Capa refers to the building as the “only survivor of the famous row of hotels on the Danube,” claiming to have stayed here: “Leaving the Hotel Bristol in the morning was more dangerous than taking pictures on the battlefield. They were cleaning the ruins of the three big hotels around the Bristol and bricks were flying in every direction,” wrote the photojournalist in the Holiday magazine.

People are drinking, eating, and smoking together on the Erzsébet [Elizabeth] Square. In the background, at Erzsébet (at the time Stalin) Square no. 7, is the (former) shop of József Völgyesi, carpenter. On the right, behind the lady, is the inscription Falatozó [Snack Bar]. The building was “severely damaged, but still of great value, as it is located in the center, in a place where the price of real estate is very expensive,” wrote the May 18, 1947 issue of the Világ [World].

Váci Street, at the time, when the cars were still allowed to go there. On the right, at Váci Street no. 8, is the Swan Leather Goods store, which has been operating here since at least the early 1940s. In 1948 it was owned by Ferencné Práger, a craftsman. In the background is the corner building of Kristóf [Christopher] Square.

Capa must have been in Budapest even at the end of September: on the 28th, József Darvas, the Minister of Construction and Public Works received him and two American journalists. “Journalists spoke at length with Minister Darvas about the war damage to the country and the results of reconstruction. Minister Darvas provided detailed information on large-scale housing production in the capital, rural towns, and villages. Robert Capa, the world-famous photographer, announced to the Minister that they would compile interesting material about their experiences in Hungary and illustrate them with photographs,” wrote the Szabad Szó [Free Word] on September 29, 1948.

Robert Capa is considered the unique visual chronicler of several 20th-century wars both in the world and the Hungarian history of photography. Get to know more about the photojournalist, who covered five wars directly from the battlefield, on our The Photojournalist Robert Capa exhibition.