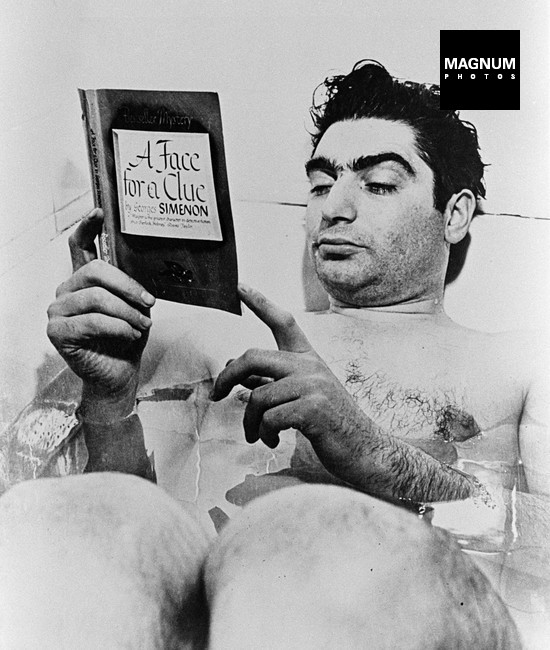 In Robert Capa’s life, not only pictures but also books and reading played an important role. Although he became world-famous as a photojournalist, he originally wanted to be a writer, and in addition, he was famous for spending hours in the bathtub in the company of a book. We now show three books that Capa has read: a detective story, a Pulitzer Prize-winning novel, and one of the classics of English literature.

Georges Simenon: A Face for a Clue/The Yellow Dog

From a photograph taken by Myron Davis in 1942, we know for sure that Capa read Georges Simenon’s book titled A Face for a Clue. Simenon’s novel was published in French in 1931 under the title Le Chien jaune [literally: The Yellow Dog], in the hands of Capa, it is visible the first English edition of the book, which was published in 1939.

Georges Simenon (1903–1989) was a Belgian writer who published nearly five hundred works during his career, becoming known primarily as the creator of Maigret’s detective character. Maigret also plays the lead role in the book The Yellow Dog: after a local wine merchant, M. Mostaguent, is shot in a small French town, the mayor invites the renowned detective to the city to solve the mystery. However, once Maigret arrives at the scene, we can witness further crimes while a yellow dog appears from time to time…

All this, of course, also attracts the attention of the press, so several journalists and photographers come to the city. The restlessness of the latter figure also evokes a bit of Capa:
“From time to time the photographer came down from his room. ‘You wouldn’t have any rubbing alcohol? I’ve absolutely got to have it to dry my film. The dog looks terrific! … Did you say there’s a pharmacy nearby?… Closed? Doesn’t matter.'”

Anyway, Maigret did not particularly like the photographers who were immediately present everywhere: at one crime scene, he “walked to the door as a photographer started to come in and slammed it in the man’s face”, and in another case, he ordered not to let a journalist or photographer in. Which, of course, didn’t bother the photographer to go in and photograph what he shouldn’t.

John Hersey: A Bell for Adano

“The airborne division, alerted for action, camped in an olive grove just behind the Licata airfield. Licata, the town made famous by John Hersey in his book A Bell for Adano, did not yet have a bell, but there was plenty of fish and sour wine. The evening was cool in the open camp, the sky full of stars and mosquitoes, and fresh rumors circulated freely under the olive trees”, Capa wrote about the campaign in Italy, recalling the fall of 1943 in his book Slightly Out of Focus.

John Hersey (1914–1993) was an American writer and journalist who took part in the 1943 invasion of Sicily during World War II, where he met Capa. Hersey also wrote an article about the photojournalist titled The Man Who Invented Himself. He wrote, “Above all—and this is what shows in his pictures—Capa, who has spent so much energy on inventions for his own person, has deep, human sympathy for men and women trapped in reality.”

The novel A Bell for Adano is based on Hersey’s experiences in Licata and during the Italian campaign. The book was published in 1944, and its author received the Pulitzer Prize for it in 1945. The novel tells the story of the Italian-born American Major Joppolo, who, after the liberation of Adano, gains the respect and love of the local people and tries to get them a new bell after the former bell, which was hundreds of years old and central to city life, was removed and melted by the fascists.

In the novel the figure of Sergeant Borth seems to have been partly inspired by Capa: in addition to have Hungarian descent, “To him the whole war was a cynical joke, and he considered his job in the war to make people take themselves less seriously.” And it is also true about Borth what Hersey wrote about Capa, “Despite all his inventions and postures, he has, somewhere at his center, a reality.”

Nevertheless, it is likely that not only Capa influenced Hersey, but also Hersey and his book Capa. While we may not know for sure whether Capa read Hersey’s novel, the style and humor of his war memoirs evokes the text of A Bell for Adano in some places, and we can assume that he did not mention the novel only after hearing about it.

“Capa had stolen books in Moscow to bring along, three detective stories, the Notebooks of Maxim Gorki, Vanity Fair, and a report of the United States Department of Agriculture for 1927. All these books were returned to someone before we left Russia, but I am quite sure they were not returned to their owners”, wrote John Steinbeck in the A Russian Journal, from which we also get to know that (as Myron Davis’s photograph shows) Capa often spent hours in the bathtub reading a newspaper or a book.

Steinbeck mentions only one specific book: the Vanity Fair, a classic by the English writer William Makepeace Thackeray (1811–1863). The novel, written in the late 1840s, gives a satirical description of nineteenth-century English society through the adventures of two young girl, Becky Sharp and Amelia Sedley. We don’t know if Capa read the bulky book during his one-and-a-half-month stay in the Soviet Union, but we can assume he read into Thackeray’s novel (or perhaps he had read it before, and that’s why he chose this book).

There is neither a photographer nor photography in the Vanity Fair (photography was only invented a few years ago at the time of writing), but the novel’s entertaining social critique may have been close to Capa:
“‘Mr. Crawley, you are intoxicated, as usual,‘ replied his wife. And the next morning, when the rector woke, and called for small beer, she put him in mind of his promise to visit Sir Huddleston Fuddleston, on Saturday, and as he knew he should have a wet night, it was agreed that he might gallop back again in time for church on Sunday morning. Thus it will be seen that the parishioners of Crawley were equally happy in their squire and in their rector.”