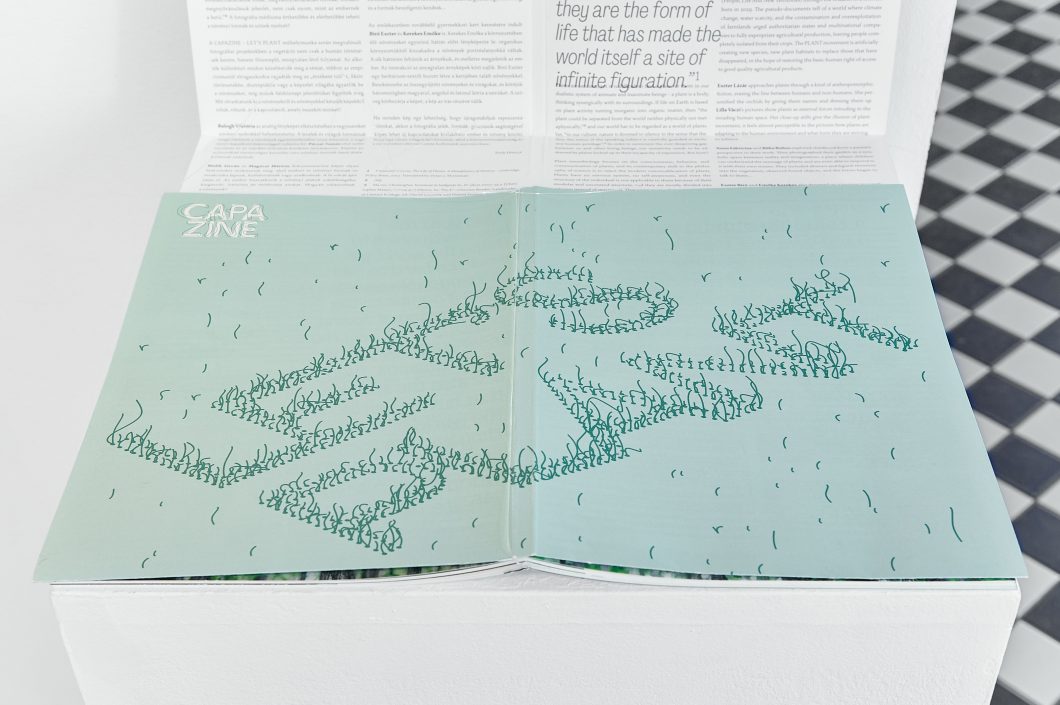 Started in 2021 the CAPAZINE – LET’S PLANT photography workshop thrashed out the concept of the garden. It takes patience, confidence, and enthusiasm to tend to a garden and the plants within. The artists of CAPAZINE direct our attention to the diverse modalities of plants and the love of vegetation by studying various aspect of the natural life and functions of plants.

Hanga Tóth participated on the CAPAZINE – LET’S PLANT workshop as a writer. Her essay called If Plants could speak to us in pictures… she reflects on the works made during the workshop.

Plants are sentient, yet it is difficult to find a place for them in our dualistic system of animate and inanimate beings – a plant is a body, thinking synergically with its surroundings. If life on Earth is based on plant activity turning inorganic into organic matter, then “the plant could be separated from the world neither physically nor metaphysically;” and our world has to be regarded as a world of plants. Yet, “in our culture, nature is doomed to silence in the sense that the they the status of the speaking subject is carefully guarded as exclusive human privilege”. In order to surmount the ever-deepening gap between us and other living beings, our sensitivity needs to be addressed by plants locked up in their incapacity of expression. But how?

Plant neurobiology focuses on the consciousness, behavior, and communication of plants; and its contemporary shift in the philosophy of science is to reject the modern commodification of plants. Plants have no nervous system, no self-awareness, and even the structure of the individual is not applicable to them because of their modular and uncentred structure, and they are mostly divided into colonies instead of specimens. They seem motionless, as if they were simply dwelling on one coordinate in space. However, the currents, the wind, the water, and the other organisms move them about, and they are in constantly growing. It is hard to track their movements with the naked eye; they live through time differently than we do. “Vegetative activity encrypts itself in its modes of appearance by always presenting itself in the guise of passivity.” Due to their stationary mode of life, they respond to an alteration in their environment by changing themselves – they transform their shapes, metabolism, behavior, and colors. The plant expresses itself through the forms it invents; it immerses itself in the matter and shapes it infinitely. According to Emanuele Coccia, plants do not distinguish subject, substrate, and imagination – for them, imagining something is turning into the imagined shape entirely. “Animal expression is oral or made up of mimetic gestures that efface one another. Vegetal expression is is like writing. Their gestures are inseparable from them, they are immutable forms, all their manifestations are a pieces of presences, not just traces, like letters for humans.” Can the medium of photography render the language of herbal shapes and colors more intelligible and accessible?

In the projects carried out during the CAPAZINE – LET’S PLANT workshop, vegetation is not simply the context of human agency – it becomes the protagonist, a process in motion. The artists approached the subject in various ways; several of them breaking from empiricism to formulate what is beyond the senses by embedding plants in fictional stories, dystopias, or in the imagination; others set off to observe their ordinary life. What do images of plants and plants tell us about the creators, about us, and about the connection that binds us together?

Viktória Balogh substituted chemicals with plant sap to create her analog photos. And as it was the coordinate work of the plants that made it possible to capture the shape of the leaves and flowers, she endowed the vegetation with an imaging ability. Tamás Páczai photographed his first grape harvest and the outset of the fermentation process. The plant structures, enclosed by the artificial frames of the vinifying tub, are beginning to slowly transform across his pictures.

In their documentary images, István Bielik and Márton Magócsi captured situations in which the human and plant life-forms engage in interaction, collaborate, or dominate over each other. A tree cavern is shut down by a door. Humankind intervenes in the diversity of plant forms, completing, controlling, and modifying the configurations. How will the plants respond?

Máté Ladjánszki captured sites and scenarios in which nature appears dominant in the urban environment. He sharply distinguished the plants from their surroundings, so they separate as patches of green color from what no one can read out and get anything. Since, even if plants are there in our urbanized life, they are often seen as lifeless decoration.

In the works of Márk Martinkó and József Bankó, plants are pushed back into the virtuality. There is nothing living in their photographs; their plants are the product of computer commands. The generated images of hybrid trees and bushes are broken by glitches. The integrity of the plants decomposes, and the relationship of the parts to the whole is altered, while the form reveals its artificial origins, and the message only informs about the absence.

Bálint Pfliegel and Milán Rácmolnár’s dystopian project explores the visual archive of the short-lived fictional movement PLANT (People, Life And New Territories) through the research of a scientist born in 2029. The pseudo-documents tell of a world where climate change, water scarcity, and the contamination and overexploitation of farmlands urged authoritarian states and multinational companies to fully expropriate agricultural production, leaving people completely isolated from their crops. The PLANT movement is artificially creating new species, new plant habitats to replace those that have disappeared, in the hope of restoring the basic human right of access to good quality agricultural products.

Eszter Lázár approaches plants through a kind of anthropomorphic fiction, erasing the line between humans and non-humans. She personified the orchids by giving them names and dressing them up. Lilla Váczi’s pictures show plants as external forces intruding in the invading human space. Her close-up stills give the illusion of plant movement, it feels almost perceptible in the pictures how plants are adapting to the human environment and what form they are striving to achieve.

Anna Fabricius and Réka Bohus explored childhood from a parent’s perspective in their work. They photographed their garden as a symbolic space between reality and imagination, a place where children can understand the message of plants and are even able to respond to it with their own means. They included abstract and figural elements into the vegetation, observed found objects, and the forms began to talk to them…

Eszter Biró and Emőke Kerekes also departed on a journey in search of their childhood gardens living on in their memories. Emőke Kerekes took photos of the plants against monochrome backgrounds – ripped off their organic surroundings, the plants suddenly turned into models of portraiture. On the flat background, their shadows appear, and beside them, those of people. The main interaction takes place between the immaterial silhouettes. Eszter Biró created a herbarium carpet out of the plants she found in her garden. She collected and scanned the herbs and flowers and wrote their names around them in Hungarian, English, and Latin in a triangle around them.

The text encloses the image and the image becomes a part of the text. If every picture is opportunity to reconsider our way of representation, then photography can use signs, shapes, and gestures to form new connections between humans and plants, to build a world where environmental awareness and the respect of non-human life are integral parts of our culture.

The CAPAZINE – LET’S PLANT zine is available at Capa Center!

The CAPAZINE – LET’S PLANT exhibition was on view until October 31, 2021 at Capa Center – 8F Gallery.