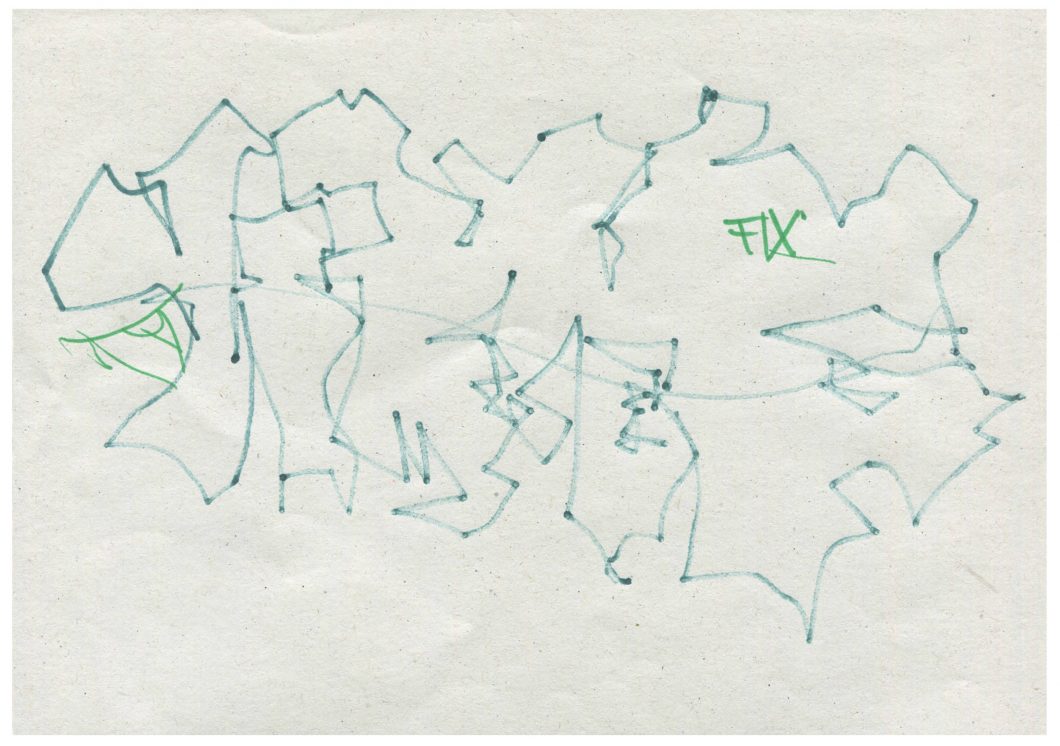 Play. Freedom. Learning. These were the main ideas behind the CAPAZINE workshop 2018 and the publication that summarizes its products. CAPAZINE is the zine of the Robert Capa Contemporary Photography Center, focusing on contemporary Hungarian photography, particularly on the work of six young artists selected. Its chief rule is already displayed on the cover: LET’S PLAY! Play is not only a topic discussed by the course leaders in their lectures, in the projects of the six photographers, and in the essays of the theorists, but it also means a future opportunity presented to readers by this special form of publication.

Endre Cserna (1997) was participating at the CAPAZINE – LET’S PLAY workshop as a theorist. In his writing titled Pictures on Speed he reflects on the photoseries, which was made during the same workshop.

Our world is getting ever more interlaced with media, achieving such a momentum that seems impossible to slow down. Our relationship to synchronicity and reality has changed completely. A symptom of this change may be people’s unquenchable thirst for new adventures, extreme experiences, and the most intense enjoymentof reality. In one of his essays on 9/11, Slavoj Žižek demonstrates this thirst by comparing the constantly repeated sequences of the aeroplanes hitting the towers to the tendency of mentally ill people to cut themselves to “feel something” through pain (Slavoj Žižek: Welcome to the Desert of the Real. Five Essays on September 11, Verso Books, 2002, p. 10). This extreme example of experiencing reality even comes with an additional twist – the entire world (apart from New Yorkers) could only experience the events of 9/11 through these media outlets. It is undeniable that living reality has become an indirect experience, and this conduit may be turned against us in a frighteningly simple manner.

The power of visuals over us is not a novelty, either: it is contemporaneous with imagery itself. The everyday usage of images has changed with the acceleration of the information torrents emanating from mass media: it has overstepped its boundaries as an illustrative tool to be the primary conduit of information,and integrated itself into the apparatus of mass manipulation. The socio-cultural and technological developments of the 20th century caused the emphasis of reality to shift towards the virtual space. It was a decision on part of digital natives to re-locate there, as the most significant events of our reality now play out in the virtual space. Although virtual activities (e.g. “liking” things) still aren’t able to incite rebellions, they might evoke such an illusion, and convey the feeling that we accomplished something real with immediate effect.

A constant topic of discussion of our era and that of our youngest generations is our enthralment to technology, and how our connection to reality is slowly fading away. As the young Hungarian artists of CAPAZINE work in this environment, my essay analyses their contributions to this publication from this vantage point as well. Within my juxtaposition of virtuality and reality, I focus on the issue of whether we should treat these concepts as each other’s opposites, or rather as building blocks of a larger whole. Is virtuality just a subset of reality? Is virtuality intervowen with reality?

The aptly named Shooting (St)range, by Ádám Urbán, introduces us to the lonely world of shooting ranges. Establishing spaces where the main objective is learning to kill in a playful manner is an absurd notion by itself. Especially now when such murderous urges are easy to satisfy through first-person shooter video games. War has become more like these simulations as well: in modern warfare, infantry has no more roles to play, and the theatre has been moved to screens and digital maps, became remote-controlled and digitalized. The people of today must be afraid of the terror that the possibility of war and our constant endangerment presents. This message is omnipresent in the media that interlaces our world. In such a situation, a firearm in our hands might provide us with the fleeting illusion of solace.

Another project deals with warfare as well. In Means of Endeavour, Dániel Szalai examines how we try to achieve tactical advantages through the manipulation of our living environment. By purposely misusing doves, he reflects with irony both on the change of momentum that took place in the information exchange process, and on how rapidly our tools of communication become obsolete. Natural before digital, doves before drones. The swiftness of wings might have indeed been considered great in the era of great wars, but today they seem comically slow. In which circumstances could we still consider doves, which already went out of style due to their obsolete nature, to be an adequate medium of communication?

Róbert Nunkovics followed a homeless street artist for half a year. Going by the pseudonym Tomy Montana, this person has drifted to the margins of society. Just as he has been labelled a “drug addict” and a “criminal” by authorities, his street art project is considered “criminal vandalism” in the cities of endless screens and billboards. We can consider Nunkovics’s work to be of a documentary nature. It strongly reflects on social exclusion. Graffiti and similar genres are presented as a form of rebellion against the all-conquering visual dictatorship of advertisements. Even a single hand-drawn picture might be a piece of evidence in our effort to decelerate imagery.

You can read the full version of Endre Cserna’s Picture on Speed in the CAPAZINE LET’S PLAY publication, which is available at the Capa Center.