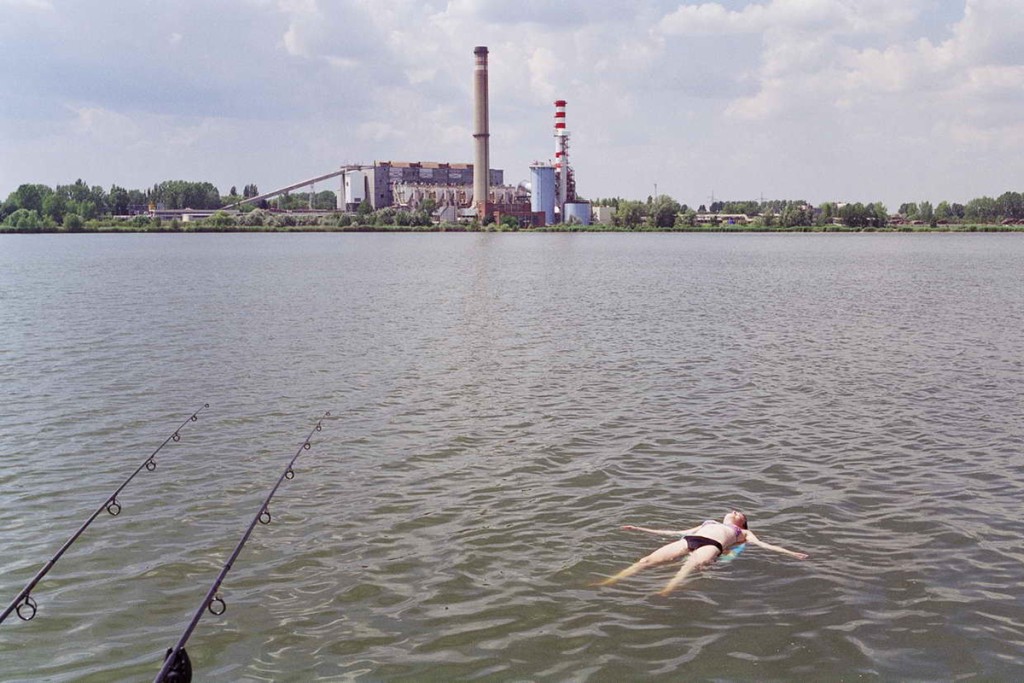 In our series, in a thematic selection, we show artworks, which were made with the support of the Pécsi József Photography Grant. The third subject is the lake and the lakeside: the series of Ildi Hermann, Márk Simon, and Zsófia Pályi show the Hungarian lakes and the related phenomena and meanings.

“Ildi Hermann’s series Summer House presents the atmosphere of the simple, low-cost cottages raised quickly in the 1960s from easily accessible materials, as it looked at the beginning of the New Millennium. The images in the series—which is based on observations in architecture, sociology, and cultural anthropology—resemble private photographs. People in the water, the kitchen gloves hanging on a trophy, the remnants of the dessert watermelon in the soup plate—iconic images of the conveniently flowing, hot holidays spent by rivers and lakes.” (Judit Gellér, 2016)

“The lake from where you can go on, where you can rest, let the stream off, immerse. It attracts the traveller, but it also lets them take a break and poses a challenge. It has a history: for the ancient Romans, the Pelso rows of villas; for medieval Hungarians the system of marsh castles and strongholds; for the moderns East-Germans the Plattense of freedom; and for us, the Hungarian Sea, where langosh tastes good and union holidays are inevitable. Lake Balaton is all this and more: distance, remoteness, the infinite wandering of the gaze. It is at once finite and infinite, momentary and eternal. It is there in the stones of the houses, in the movements of bathers, it shapes our words, our customs, our songs. It is a primordial element, a loch, och aye an eye, a mirror of the sky, the mirrors of the soul, or the sea inside? These are the questions to which I am seeking the answer.” (Márk Simon, 2011)

“Lake Balaton is the biggest lake in Central Europe. The pictures show the Central European flavour that is fading away year by year because of cultural changes. During the 1960s and ‘70s, it was a major tourist destination for working-class Hungarians and people from the Eastern Bloc. It also served as a meeting point for Eastern and Western Germans who were separated by the Berlin Wall until 1989 but could still travel and meet here. After the collapse of Communism, the region becomes less popular, slowly becoming dilapidated, visited only by Hungarians. However, a new renaissance can be felt now; foreign tourists appear again.
At first glance, the scenery of Lake Balaton evokes a coastal resort with an endless horizon. But in fact, the water is very shallow, reaching only ten feet on average. The illusions unfold and Balaton remains only a lake although, among the local people in Hungary, it is still said to be the Hungarian Sea.” (Zsófia Pályi, 2013)

“The purpose of the Pécsi József Photography Grant founded in 1991 was to ‘help to start the career, creative work, and development of talented photographers working as independent artists, and to provide them with beneficial conditions for creating high standard artworks, which are modern both in terms of form and content.’ […] An important element of the scholarship is that the artists selected by the jury present their series in a physical form. The most important aim of the archive to be compiled for the 25th anniversary of the Pécsi József Photography Grant is to make up for a deficiency of these two and a half decades: to present the works of art created in this period in a digital form, to make them accessible, visible and researchable. For the sake of completeness and accuracy, the archive is edited and updated continuously, and the descriptions of the series are published in English language as well.” (Judit Gellér, curator, the operator of the archive)

On the 25th anniversary of the grant, in 2016, the Robert Capa Contemporary Photography Center organized the exhibition Pécsi 25, showcasing the works of previous grant recipients. Related to the exhibition, studies written by Judit Gellér, Attila Horányi, József Mélyi, Monika Perenyei, and Miklós Zsámboki were published. The book is available at Capa Center.

Have a look at the other parts of the thematic selection as well!