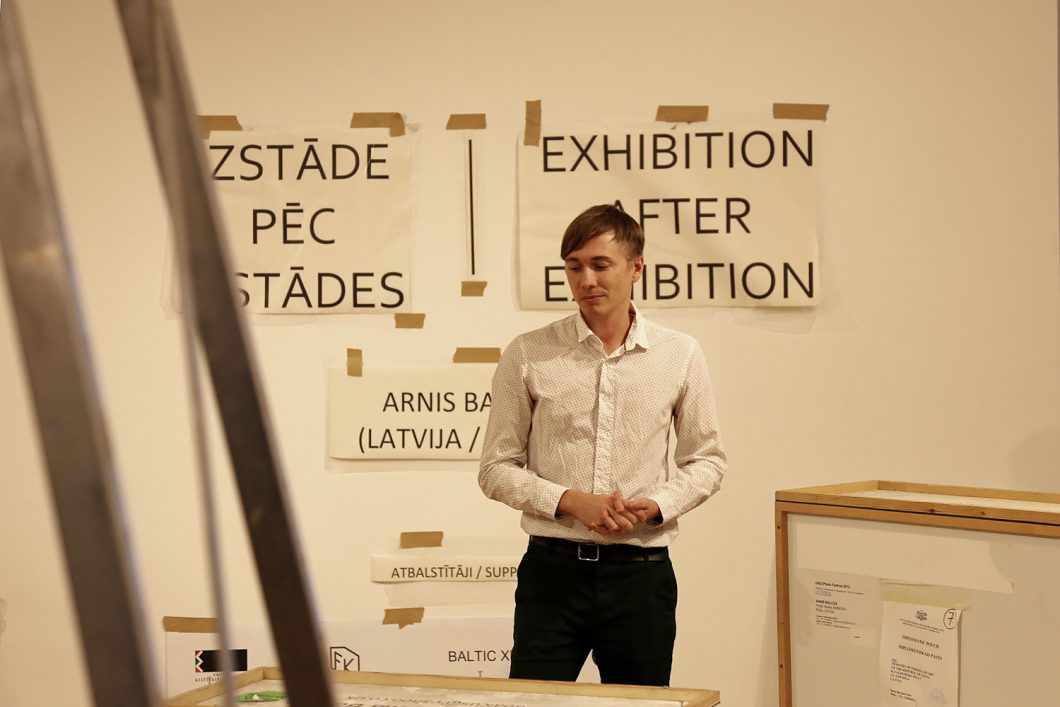 Arnis Balčus (1978) is a photographer, Editor-in-Chief of FK Magazine and the Director of Riga Photomonth. From 2004–2009 he was living and working in London, received a master’s degree in photography at the University of Westminster in 2005. He participated in various exhibitions since 1994, has exhibited in Riga, London, Berlin, Hamburg, Copenhagen, etc., as well as have published a photo book titled Victory Park (2016). Arnis participated as an expert at portfolio reviews in Arles, Moscow, Kaunas, St. Petersburg, Helsinki, Derby, Madrid and Landskrona photo festivals, as well as nominating and evaluating entries for photo contests such as Prix Pictet, Bird in Flight Prize, Google Photography Prize and others. He is a founder and director of Riga Photomonth festival that runs in the capital of Latvia since 2014.

I started very early – as a child, because I got a Soviet snapshot camera Smena 8M for my birthday when I was 9 or 10. I had my first show when I was 18 (in a club), so I guess I can say the photography was important for me from an early age. And I have been through many stages – from turning the camera on myself to other people and larger social-political issues, from being a slave to a camera to liberating myself from technologies, etc.

In your opinion, where does the power of photography lie, what is the most powerful thing about it? What are the values that you think are best represented by it?

Its strongest point, which is also its weakest at the same time, is that most people believe that photography represents reality. So, it is a good storytelling device, great for shaping people’s perceptions of the world, but maybe a bit harder if you don’t want to be too straightforward… Photography is a good way to talk about us, humans, our relationships, problems, histories, obsessions, demons…

I guess lately I am not so much a photographer but a manager – running a photo festival (Riga Photomonth) and a magazine (FK Magazine). Of course, these activities influence local community in a good way (I hope), but sometimes I wish I would have time for my own photography.

Well, a complex issue cause it’s not just about invention of digital cameras or Instagram but also how the world and our habits of creating, sharing, and receiving photographic images have changed due to digital technologies. Yet, I believe that the technologies have developed faster than our visual literacy. We are surrounded by many images and it gets harder and harder to orient ourselves. It’s like living in a shopping mall where everybody chaotically buys staff, and you kind of have to buy some shit unless you want be a loser.

I don’t care if someone calls themselves “an artist using photography” or “a photographer.” I mean, if you make documentary films or feature films, you are still a director. Of course, there is a difference between a photojournalist and his objective of reproducing some ideological agenda set by an employer and a photographer who is purely expressing his artistic vision. There are photo festivals and then there are art biennales that have some photography and very often these are two different worlds, well, a bit like documentary and feature film festivals. I don’t see any problem there, at the end of the day, it’s all about the quality of the work, and there is always great and also bad journalism, documentary or arts.

There have always been certain trends and tendencies in photography (like favoring specific creative approaches, topics, themes, etc.). What is it beyond these that can make a project exciting and a new piece outstanding today?

I don’t think I know the formula. Some years ago we had a lot of photographers who appropriated Alec Soth, and actually this formula – portraits and landscapes about some dying village – is still very popular. Then it was about using archival images a lot and then, in the last years, it’s about technologies and social networks (from Google Street View to Instagram)… On the one hand, trends come and go and a lot of this trendy stuff seems outdated and boringly overproduced, but, on the other hand, they also influence the language of photography for good or bad. Well, the most important thing is a good story or/and extraordinary visuality. I know, it’s hard since we have the feeling that everything has been done already.